Posted by: pkmurphy 11 years, 2 months ago

Don't be like me. Don't forget there's still an oil spill in the Gulf of Mexico. It slipped my mind. I guess it's not newsworthy, because news about the event would almost seem repetitive. ("Spill still there. Except larger.") You might as well call it olds. Thank you, Joe Bageant, for bringing it back into focus for me. It might be a brief mention in a blog post - a one paragraph withering slam at the inattention of his fellow Americans [1] - but "Oil Spill" is back in my memory banks for now.

The problem with the slick - no, a problem with the slick (articles are important, kids!) is that it is hard to feel the magnitude of the thing if you don't live near it. When a ship leaked 30 tonnes of oil onto Moreton Island and the Sunshine Coast, it was easy for me to visualize the size of the disaster. It was only 100 or so kms away from me. But I've never been to the Gulf. The nearest I've been is Dallas, I was only 11 at the time, and it was just for a week. What do you do to get your empathy on for Gulf-deprived individuals like myself?

Enter Andy Lintner, a very smart man with a blackbelt in Google-fu. He created If It Was My Home, "Visualizing the BP Oil Spill Disaster". It's a very simple idea. Take the oil-spill data from the NOAA, and plot its size and shape on Google Maps. Then allow viewers to "superimpose" the slick on their neck of the woods. I did it for Brisbane, and then I did it for nearby Nerang, because the results are more dramatic, and I got a little frightened. 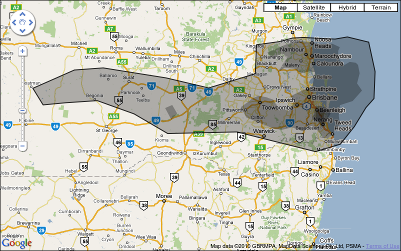 For the Non-Queenslanders in the audience, let me explain. Brisbane, where I live, is a two-million people strong city. It is surrounded by three other cities over 100,000 in population - the Gold Coast (the Nerang-Tweed Heads area south of Brisbane), the Sunshine Coast (from Noosa to Caloundra) and Toowoomba. The oil slick - superimposed in the right spot - encompasses them all. Then there's a line of it heading about 700km west into (or close to) the Outback. The true Outback - not the Bush.

Not that I can do much about it. I don't have shares in BP to sell, I don't have Obama's private number, and America isn't my country. But I can remember - or to use old fashioned Biblical language - testify. The oil well may with the best of luck be capped in August - at the very earliest. I hope so. But on the same site, there is one commenter inferring (using long but not too hyperbolic language) that the well is compromised "down hole", and no short-term capping is possible. If so, the spill is going to become the problem of other people, such as the Europeans. The Gulf Stream current is named after the Gulf of Mexico.

[1] Paragraph quoted in full: "For example, now faced with what may be the biggest ecological disaster in human history, I'm hearing average Americans up here talk of the Gulf oil "spill" (when they speak of it at all -- TV gives the illusion those outside the Gulf region give a shit), in terms of its effect on: (A) the price of seafood; and (B) jobs in tourism and fishing. Only trolls stunted by generations of inbred American style capitalism could do such a thing: reduce a massive ocean dead zone to the cost of a shrimp cocktail or a car payment."

There are currently no comments