A not so small Foursquare review

Posted by: pkmurphy 9 years, 3 months ago

Note: "Event Junkie" was the name of the app I worked on for the DECO7350 group project. The gist: design an app where users can find events around them in real time. When I wrote this post, I had high hopes for the application. I still do. What I didn't anticipate is falling out with my team mates over financing. I should write more about this later – I really should. But let's concentrate on what I wrote at the time.

Foursquare is the ninth application reviewed for this course, but it is the first I see as a possible competitor. I am quite aware it's quite preposterous to think that way. I'm comparing a well publicized and financed social network – with a working implementation and 25+ million users – against our DECO7350 group project Event Junkie, a few weeks out from our inaugural presentation, and with not even a finished prototype. But on the gripping hand, both applications are comparable: they are intended to be location-based social networking apps, where users can browse relevant data on online maps. There's a lot to be learned from Foursquare, whether one wants to compete or collude with them. Why not write a blog post about them, then?

Aside: what's the big difference between Foursquare and Event Junkie? The former is about "venues", which have location, but are assumed to exist in perpetuity; the latter is about events, which have locations, but also delimited start and end times. It would not make sense to create events for Westfield opening hours, but creating events for "specials offers" would do. However, many users do not want to see "shopping spam", so said events should be able to be filtered out with ease. 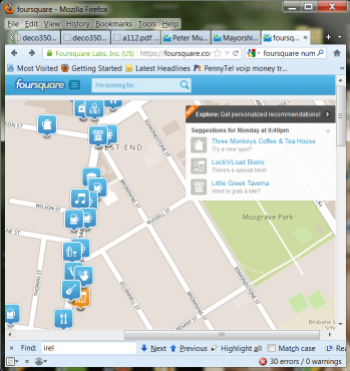 What's near my house on Foursquare.

Foursquare is a tool for users to discover places they may find interesting. Foursquare's main interface is a map where the locations of these "venues" (using the jargon of the app) are marked with icons indicating their functions. Most of these places would be considered "venues" outside of Foursquare: they're bars, cafes and restaurants, and do venue-ish things such as showing bands and hosting functions. West End (shown above) is well represented here. But "venue" is also used for borderline venue-ish places such as art galleries like GOMA, which shows movies and the odd musician or band; "venue is also used for places that normal English speakers would not consider a "venue" at all, like all the Westfield shopping centres in the Brisbane area.

(Terminology is important, because when you start to use English words in a non-intuitive way, users don't quite know what you mean. I think "place" or "spot" would be better words than "venue" for Foursquare places of interest. But this essay is about social media – not English – so let us return to the Foursquare map.)

A user views the icons for the venues presented to him or her, and selects whatever appears attractive at the time. This opens up the venue's page, which gives information about what it offers and what specials are on hand. For example, if you visit Lock'n'Load Bistro, which is a popular place at my neck of the woods, you can "Get yourself a free Coffee 1st time you check-in on Weekdays". Users can also leave 'tips' to other people: tips of advice, not actual monetary tips as they do in the USA.

By the way, what do they mean with the term "check-in"? The idea is that when you visit a "venue" in real life, you can "Tap the Check In button" on your mobile phone to tell Foursquare you are there. This allows you to "unlock specials and score deals". The more you check-in, the more likely you can get "badges" on your Foursquare page – from "Newbie" to "Superstar". Moreover, if you do the most check-ins to a place in the last 60 days, you can become "mayor". That means you "might also receive special treatment or score awesome deals", rather than get involved in dodgy lucrative real estate deals like real mayors do. Actual owners of venues are banned from the title of "mayor".

Foursquare is another app which tries to do the right thing by Clay Shirky's Four Things to design for [Social Software]:

Never the less, I am a little skeptical of how much "critical mass" Foursquare possesses. It was launched in 2009, and already has 25 million people in the "community". There seems to be lots of "venues" or "places" or "spots" in the Brisbane area, and mostly around the urban core. Yet I can't shake the feeling that Foursquare's best days are behind it.

Maybe it's because Foursquare – although it is designed for adults – appears like it is designed for children, and children with both an excess of money and time, but who happen to be over 18 years of age. Take the position of "mayor", which users can become if they do more check-ins than others at places. It seems silly to me. When I think of "mayor", I think of politicians – generally not very nice people, but they help run cities. Calling yourself "Mayor" of Toowong Station just because you're the Foursquare user who spends the most time there? It's like calling yourself "King" because you have one of those paper crowns from Hungry Jack's.

Foursquare is a little bit like a game, and like a good game, tries to provide incentives to keep playing. As you use the app, you gain more badges. However, there isn't really any payoff for the user besides getting the odd discount or freebie every now or then. It's yet another "Disparity in work and benefit". In contrast, Stack Overflow has incentives for the user to keep "playing", such as improvements in one's coding skills, and the chance of a better job down the line.

I'd also add that getting "reputation" from other users, which Stack Overflow does, is more satisfying than getting "badges" from an algorithm. You've done something that someone else likes, rather than jumping over hoops to please some corporation's procedures. Finally, Stack Overflow uses a numerical score to measure how popular a user is. It provides a baseline for comparing your popularity to others, and it's easy to keep in your head. The way I think about it: if you want badges, you might as well join the Scouts or the Army – organisations where badges are given for real accomplishments.