Posted by: pkmurphy 9 years, 9 months ago

Recently, I was down in Melbourne for a wedding. Most people coming for the event were locals, but some had come from as far afield as Brisbane. I (obviously) was one; so too was the groom's brother. While drinking some of his generously offered beer, we somehow got onto the topic of what Brisbane's worst suburb was. He brought up Ipswich, only to rubbish the very idea that it was the worst. Many of his friends lived there, after all. Inala was another place with a bad reputation, but my wife likes to shop there, and it has great phở, so cross that out. Kingston? Another place prone to fear mongering, but that's where the groom's brother's from: no difficulty living there at all.

I brought up Deception Bay. Some of my friends and acquaintances had lived there and amassed some horror stories: could that be the worst area in the Brisbane metropolis? How did he respond? He took out his mobile, chose an application, and it started streaming the police radio from that area. We had agreement.

The name of the app was Scanner Radio, the subject of this post. Scanner Radio is a utility that is designed to act like your own police/scanner. You choose a station, you press the "play" button, and you can start listening to the emergency service of your choice. The app is not the same as a real radio scanner; it does not extend the receiving frequencies of your mobile to listen in to transmitters around you. What it does is grab a live feed from Internet audio providers such as RadioReference – "The world's largest radio communication data provider" – and this accesses the signals of actual scanners in the field.

The catch is that you need someone to hook up their scanner to an Internet audio provider first. You have to depend on the kindness of strangers. There are police scans for the Redcliffe and Caboolture area, but you would be out of luck looking for the central Brisbane equivalent: no-one has hooked up their scanner to RadioReference. The upside of Scanner Radio is its flexibility compared to a real scanner: you aren't limited to signals in your own vicinity. For example, I was just listening to the Californian Highway Patrol some minutes ago – live out of San Diego.

Scanner Radio is quite easy to use. Once you start it up, you are shown six icons – each representing a feature of the app. Most of these are to find the services you are interested in receiving, such as "Favourites", "Search", or "Browse". 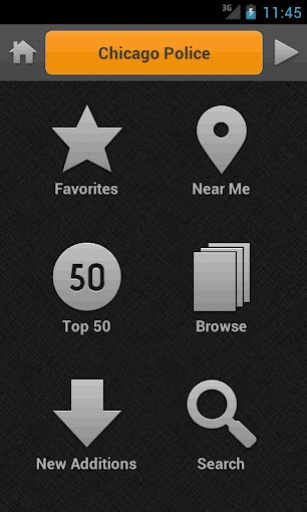 The "Search" window (not shown) isn't that well designed. You have to type a search term and choose a minimum distance from your position in miles. It's not either search term or distance to location but both search term and distance, which is confusing, and there is no way to configure the app to use civilized units like kilometres. 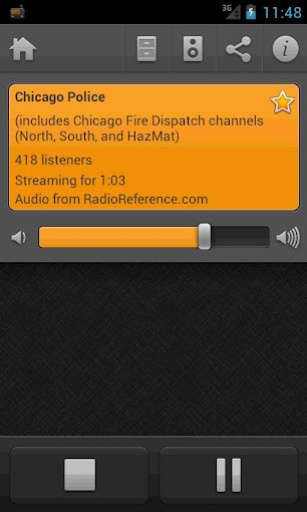 Scanner Radio – Listening to the Radio

Scanner Radio is a mobile app, but it is not a social app. The base application does not support comments from listeners. There exists a Scanner Radio Chat Plug-in, which allows listeners to chat with each other in text. However, when I installed it, I found that few people use this add-on. The "Top 50" chat rooms yielded only two, and one was for an amateur radio network.

How does Scanner Radio measure up against Grudin's eight challenges for developers? I think it acquits itself very well.

Scanner Radio is not my sort of product, but it feels suited for what it is: an app that allows casual users to eavesdrop the emergency services in their area. People who are really, really into that sort of thing can go and buy their own scanner. For the rest of us – especially the ones avoiding DUI convictions – Scanner Radio does what it does quite well.