Posted by: pkmurphy 9 years, 12 months ago

Note: this was the second blog post for this subject. The date was changed to make it into the master feed for the subject. All Facebook names have been smudged out to protect the guilty. 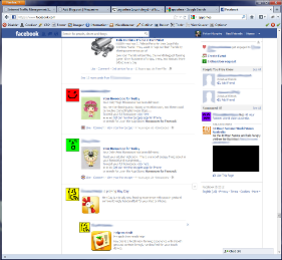 I've become increasingly annoyed with Facebook, as have other friends of mine. What is the reason for this annoyance? The cause is the News Feed: a mechanism that purports to "share the most interesting stories" from my peer group, and to inform me of their actions and whereabouts. In CSCW matrix terms, the Feed is distributed, because people can be posting from anywhere connected to the Internet; and the Feed is asynchronous in that messages released to people's walls can be available later on. But the Feed is not that asynchronous, because potentially useful information is often buried under by other people's nonsense. It's a situation of "catch it quickly or miss it entirely".

Take a recent example: a friend stated he was going to attend a play and posted this information on Facebook. But because he never invited people by name, no-one knew the name of the play, or even that the friend had posted this data, until he told them in person. It got supplanted by 101 other status updates, most of which were banal rubbish.

"Facebook Apps" are a common source of banal rubbish; they are designed to propagate ads for themselves to as many feeds as possible. Fortunately, one can filter the apps out (more or less), even if the instructions provided don't always match what is presented to the user. But other banal rubbish comes from men and women like us. And that makes it worse. I like these people, but I don't have the heart to tell them what nonsense they pass on. Stupid memes, cute kittens ahoy, supposedly "motivational" images that make me want to slit my wrist, and for me, my pet hate: the stale slogans. Ever heard of that line "It will be a great day when our schools get all the money they need and the air force has to hold a bake sale to buy a bomber"? Turns out it dates back to the 70s. Well, I don't get that line, but I get lines like that. Lines that are a nice sign of showing one is politically aware, but don't do anything to challenge the powers that be. And since I've probably come across the same statement 10 or 20 years ago, I'd rather not hear it for the fifth f-ing time, ok?

So this is Facebook: a tool that should raise awareness, because of the amount of data coming from friends, but instead reduces it, because there is too much stuff in one's feed and the signal to noise ratio is down. There's some concept of "I am aware of X"; but there is hardly any tools for "increasing awareness of other people's awareness" besides the Like button and comments. It would be nice to have a Dislike button, but it may be rude to use in practice. I'd prefer a "I Like You But You're Polluting People's Feeds With Your Sh-te" button, but it doesn't quite roll off the tongue...