Posted by: pkmurphy 9 years, 11 months ago

This caused a bit of a stir a few seconds after that. Twitter is a factitious environment, but not all tweets invite visits from the US Secret Service.

I should state that I will not write the 16 year old girl's name, due to her being underage. It feels like ethically dubious behavior to me. Readers can find it out if they wish, and I have provided enough information already; I care not to name her here. Teenagers (and adults!) do dumb things, although generally not this dumb. I admit I was originally appalled and disgusted, but some hours later find myself more detached. I vaguely hope that she can learn from it. It helps that I'm not American; I would be less forgiving of a similar expression about Julia Gillard.

Alas, others are less forgiving. I read the tweet, left her page open, and popped out to visit my wife in hospital. When I came back two hours later, there were 1216 new tweets, mostly abuse. I then picked up some clothes and drove back to the hospital; after another three hours I returned, and discovered her Twitter account had vanished. I found another page where someone with retribution in mind decided to identify the high school attended by our recalcitrant Tweeter, the name of her principal, her taste in shoes, and so on. That's when things got a little too ugly for me to keep close track of this story. 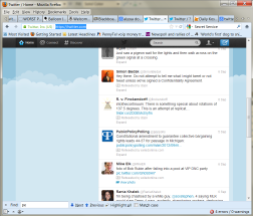 I'll mention something about the Twitter interface. When I first saw the 16 year old's tweet, I intended to hit the "Refresh" key. Instead, I tapped "Retweet" instead. Big Whoops. Someone could get the impression I was in favour of assassinating sitting presidents, which would be quite damaging to careers both work and academic, plus be seen in a bad light among my friends. So I quickly typed out the following tweet:

Then as fast as possible, I searched for means to delete the offending retweet. Fortunately, there are instructions for retweet deletion (which I immediately followed), but by god, they are counter-intuitive. Normal tweets come with a normal "Delete" link, but for retweets:

You can undo a retweet you've made by clicking on Retweeted in the Tweet.

I would rather that Twitter provides an "unretweet" link instead. It may stretch English grammar to the breaking point, but it is far more obvious.

What CSCW aspects of Twitter does this whole sorry saga reveal?

Do I like Twitter? Not really. I put up with it. Occasionally, there arises a spat or flame war of interest, but mostly I try to ignore this particular social network.