The great white wilderness of Google Plus

Posted by: pkmurphy 9 years, 11 months ago

Note: this blog post was the seed for an assignment later that semester. To quote the instructions for the subject:

This assessment takes the form of a structured article which reflects on the design of social and mobile computing applications by using the specific context of one of the social & mobile encounters posted in the class blogs as a starting point.

I am thinking of adding the assignment to this site.

Some of my fellow students have blogged about Google+, so I thought I would pay it a revisit. Upon (re)viewing it, my reaction was "It's so empty." From the screenshot below, it appears to be missing some layout; the right hand side of the page has been left fallow. But Google+ is empty in other senses of the word. It's missing the personal content that I want to read, and missing the people to provide it. 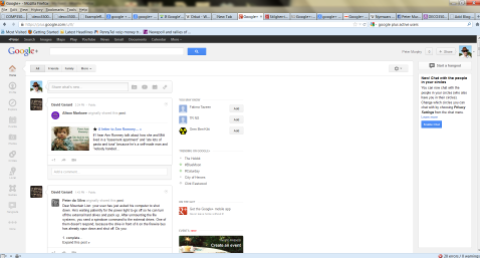 Google+ as viewed at home.

I felt Google+ was extremely underutilised, but wanted numbers to confirm my impression. I decided to perform my own rough statistical analysis. I counted how many "friends" I had on each network, and also how many people had posted something – a photo, a link, anything at all – in the last 24 hours. I have 148 "Friends" on Facebook, and 45 "Friends"/"Family" on Google+ – a ratio of roughly 4:1. In the last day, I had 24 of my acquaintances do something – anything at all – on Facebook. The equivalent on Google+? One. The plural of anecdote isn't data, and perhaps my sample is biased by not working at Google, or living in Silicon Valley, or even the United States. But from an Antipodean perspective, it looks Google+ is not getting the bums on seats.

Google+ seems to suffer from some of Grudin's Eight Challenges for Developers. Choosing three in particular:

It's no coincidence that my last ever Google+ post, which was written on August 11, 2011, referred to that article. The naming policy pissed off a lot of people – including myself. We couldn't be bothered contributing, so we didn't.